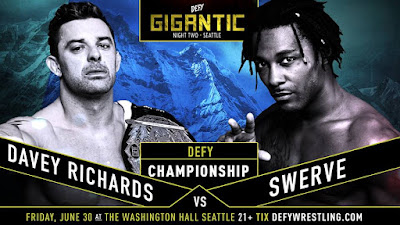 Another Defy Wrestling show is in the books and this one did not disappoint. The absence of Pentagon Jr. and Fenix did not slow the Seattle, WA based promotion down, as they capped off a two day run that began Thursday in Tacoma. It was a fitting tribute to the late northwest wrestling legend, Buddy Wayne.

Joey Ryan had another highly entertaining match at Washington Hall. He seems to have found a home away from home in Seattle. He and West had a great comedy match here, which featured all of Ryan's trademark spots.

Mike Santiago turned out another solid performance, this time against New Japan Pro Wrestling talent, Davey Boy Smith Jr. Santiago, for a relative unknown, has displayed good character work and put together very passable matches on the two occasions I saw him wrestle. Smith played the classic babyface and looked great in this independent outing.

What can I say about ReDragon vs. Matt Cross and Darby Allin? Defy was put in a tough spot with the incident that led to the Lucha Bros. pulling out of the show. With that being said, these four guys made up for it by turning out an excellent tag-team bout. Darby Allin really shined in parts, but the veterans were hard at work here. With Fish having debuted in NXT and O'Reilly seemingly on his way, you'd think the two would be slowing it down and be overly cautious. Even with that in mind, the two were fully engaged in this match and made it as exciting as it could be given the spot on the card. Loved this match.

Finally, the finals of the Defy Championship 8X Grand Prix to crown the first ever Defy Champion. Defy did their work here, having shot an attack angle from Richards on Strickland in Tacoma the previous night. Richards entered first, then Stickland's music hit. Strickland did not come out, selling the injured knee from the attack. They hit his music again and finally he turned up. Richards attacked him from behind and gave him a suplex on the floor, again putting the match in jeopardy. The story was fantastic in this one, as Strickland willed his way to his feet and fought back. They traded huge shots, pulled off incredible sequences, and overall lived up to the bill of a first-ever title match. 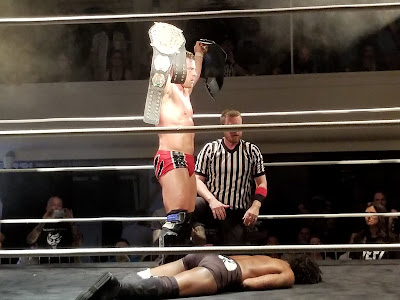 Davey Richards deserves a lot of credit for this match. The guy accumulated so much heat during the initial beat down. Working an angle can't be the easiest thing without the benefit of television and an announce team, but the angle really got over with the live crowd. Of course, credit to Defy as well. The match had a ton of crowd heat and finally ended with Richards coming out on top.

Though the result was not what the crowd wanted, it obviously opens the door for many more interesting possibilities. A rematch will surely be on the horizon and more great matches from Strickland on his road to getting that rematch. Defy put out the hook tonight and it seems the fans bit. Personally, I am very excited to see more. And isn't that the point?

If you are a wrestling fan and live anywhere remotely near Seattle, you must come out to a Defy Wrestling show. The quality of wrestling is incredibly high, especially as you get deeper into each card. Similar to the rise of PWG, Defy is building upon a wild fan base and an ever-growing talent pool of independent wrestlers. The northwest wrestling void has been filled over the limit in just a few short months. If you're a fan, it's time to get up, get to a Defy show, and enjoy the ride. This promotion is heating up fast. Don't miss out.

Brady Sauvageau
-The Heater
Posted by Unknown at 1:33 AM No comments: